Home / EXHIBITS / Geometric Abstract Art : From the Origins to the Réalités Nouvelles

From March the 2nd to April 22nd

Geometric Abstract Art : From the Origins to the Réalités Nouvelles

The early 2017 presentation of Jack Kouro’s collection in three Parisian galleries: Le Minotaure, Alain le Gaillard and Jean-François Cazeau is an introduction to the history of geometrical abstraction in the 20th century. An enlightened collector, Jack Kouro was an intimate friend of Auguste Herbin, an abstract painter.

This exhibition offers an exceptional journey into the great moments of non-objective art, from the 1920s to the 1950s. It tackles the international movements and associations such as De Stijl, Cercle et Carré, Concrete Art and Abstraction-Création as well as the famous Salon of the New Realities (Salon des Réalités Nouvelles), an abstract art circle which gave all Paris the run-around at the end of World War II.

Auguste Herbin is the red thread of the exhibition; a painter privileged by the Kouro collection, greatly active in the recognition of Abstract Art in France, at a time  when it was still very controversial.

While architects, furniture designers, painters and sculptors from Bauhaus and De Stijl movement are laying foundations of the reflection on modern architecture and on what will later become “the international style”, Herbin moves to the Bateau Lavoir and travels along the paths  of Impressionism, Fauvism and Cubism. His paintings participate in the exhibitions of the Section d’Or and of the Salon des Indépendants alongside Metzinger, Léger and many others … In 1915, he meets the famous art dealer Léonce Rosenberg who, after having acquired several paintings, signs an exclusive contract with him  at the Galerie de l’Effort Moderne.

After a brief figurative “break/cancellation” (1921-1926), the painter rejects definitively, and with great intellectual and ethical rigor, figurativism. On April 21st, 1927 he writes to Rosenberg:

“Personally, I am going back to abstraction with ideas that are very different from the ones I cultivated before. I do not care about my reputation and it is neither chance, nor play, nor calculation that command my transformation. To change air is to save your life. To change mistresses is to save love.”

A decade later, Herbin meets Jack Kouro who will become not only one of his most faithful collectors, but also his friend. A few months, before Herbin’s death, Kouro even records a 45-minute interview with the artist.

In 1930 Michel Seuphor and Joaquin Torres-Garcia, along with other non-figurative and, above all,  neoplasticist artists, create the Cercle et Carré group, (Circle and Square group) whose idea is to make Cubism, Futurism and Purism exchange by seeking to “humanize geometry and geometrize the human.”

In opposition and in defiance to this last objective Jean Hélion creates the movement Art Concret. The group is characterized by homogeneity and a rigor of almost extremist theories.

The activity of these two groups is however rather ephemeral and closes in a year approximately, mainly for financial reasons.

In 1931, in order to continue their research and to both encompass and ensure the international presence of various non-figurative avant-garde tendencies of the interwar years, Theo Van Doesbourg brings together a number of artists of different nationalities and founds Abstraction-Création.

As the world confronts totalitarian regimes and moves again towards a conflict, Herbin locks himself up in his studio and reflects on the creation of a plastic alphabet that will become the key to his work and a guide to all of his future creation.

At the end of the war, he resumes his fight for the recognition of abstraction and creates the Salon des Réalités Nouvelles (Salon of New Realities), which will become the center of the international avant-garde between 1946 and 1955.

Thus, Auguste Herbin’s journey and his relationship with Jack Kouro give Benoit Sapiro, Alain Le Gaillard and Jean-François Cazeau an opportunity to recall the great adventure of abstract geometric art. From March 2nd, 2017, at Jean-François Cazeau’s Gallery, one can explore the personal universe of Kouro (with archives documents, letters, works by La Fresnaye, Léger, Matisse and a series of preparatory drawings by Herbin). Simultaneously at Le Minotaure and at Le Gaillard Galleries one can see an exceptional set of paintings by Herbin, property of Jack Kouro, works by Beothy and Kupka (two artists with whom he had privileged relations)  and a selection of the most important figures of the history of abstract geometric art such as Léger, Hélion, Tutundjian, Moholy-Nagy and many others …

The exhibition will be accompanied by a catalogue in French and in English.

Teaser of the exhibition on You Tube

Geometric Abstract Art : from the origins to the Réalités Nouvelles. Around Kouro Collection 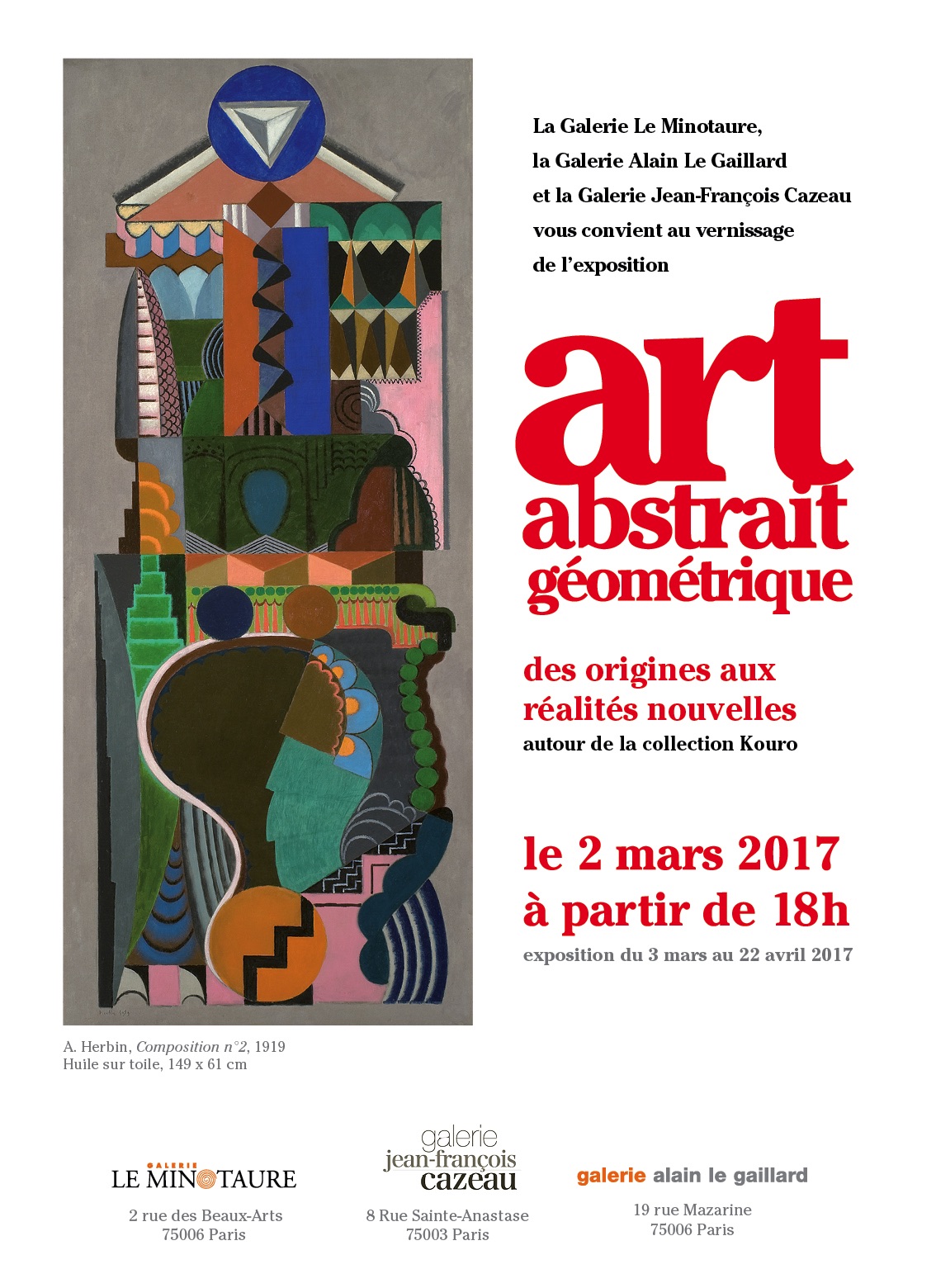